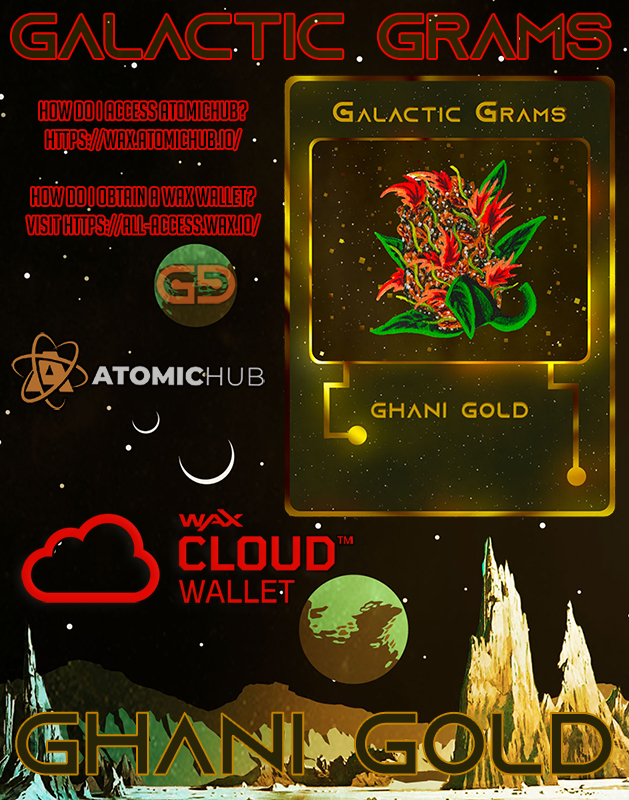 Some of the first specimens of Ghani Gold appeared In New Megalopolis on the heels of “The Late Great Sativa Dispersal”. Seeds from deep within the war-torn Asteriodial Complex named “The Ghani Sands,” were brought to New Megalopolis by soldiers and cosmic drifters. The growth characteristics, morphology, and chemical profiles of these Hard hitting Indica genetics Kicked off a wave of Breeding whose impacts now echo throughout the Galactic Gene Pool. A great many modern Strains can be traced back to this line of Genetics.

Notes- Classic Ghani genetics express as compact, crystal laden floral clusters. Olfactory notes include “Danky, Diesel, SKUNKY, Hashy, and Chocolatey”. Ghani Golds’ Photoperiod Flowering Response specs led to higher yields and potency, along with an increased number of potential crop cycles per growing seasons.  The lower profile of these Squatty Genetics aided in evading aerial detection and were also easier to camouflage in remote clandestine Outworld Gardens. (Amongst native vegetation)
One Primary weaknesses associated with Ghani Gold genetics is its inability to handle high humidity during flowering stages. (Mold resistance is improved by mindful breeding between The Ghani types and the Old School Sativas, which have a comparatively higher mold resistance than the Ghani Types.)